Larkin Kent was the son of Delphine Duchannes and Barclay Kent, brother of Reece, Ridley and Ryan Duchannes and the cousin Lena Duchannes. He was a powerful Dark Illusionist, someone who can cast and change the appearance of an object or person. Larkin was at first believed to be a Light Caster, but later revealed himself actually as a Dark Caster.[1]

Larkin Kent was very helpful and helped Marian with the Lunae Libri. He protected it from thieving eyes, as he was an Illusionist. This occurred after he helped Lena escape Macon Ravenwood's watchful eye and go to the surprise party, which was really a trap, leading her straight to Sarafine Duchannes.

The women in the Duchannes line, traditionally, keep their last name. When explaining as to why he chose to be a bad guy, he explained, "It's a whole lot more fun being Dark than Light".

Larkin was killed when Lena's Claiming as both Dark and Light required the sacrifice of two of her relatives, one from each side.[2]

As an Illusionist, he is able to change the appearance of an object or person, but not the actual object itself. He made his eyes look the green eyes of a Light Caster and was really a Dark Caster. He made his arms into snakes and his eyes into snake eyes.[3] His powers are comparable to that of a Shifter, and is typically seen as less than, but that may not always be the case.

Larkin was portrayed by actor Kyle Gallner in the film adaptation of Beautiful Creatures. Unlike his book character, Larkin appears to be truly Light in the series, never coming out as Dark, even helping Macon to spare Ethan's life in the movie by pretending to be him (Macon) at a family gathering for Lena's Claiming. 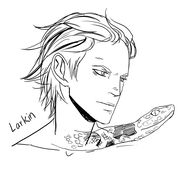