Delphine Duchanes, better known as Aunt Del, is the daughter of Emmaline Duchannes and Silas Ravenwood, sister of Sarafine, and half-sister of Macon Ravenwood. Delphine married Barclay Kent, and together they had Reece, Ridley, Larkin, and Ryan. She is a Light Palimpsest, a Caster who reads time. Del is chronically confused because she is never quite sure where or when she is. She was there when Sarafine was thrown out of the house after she turns dark, which breaks her heart.

As a Palimpsest, she is able to read time. She can see different points in the past and present all at once. She can walk into a room and see how it is today as well as in the past like when Lena and Ethan touch the locket. She is always confused because she is able to see different time periods. She can also let others see different points in the past or present by holding their hands. She used this power to help Lena and Ethan find the Book of Moons at Genevieve's tomb. She also used this power to find the Cast to release an Incubus from the Arclight and what happened in the attic.

Emmaline is Delphine's mother. They have a supposedly close relationship as they're both claimed for the Light. It seems that Del is the only daughter Emmaline will "claim" as hers.

Barclay Kent and Delphine have been married for years. They had four children together.

Reece is Delphine's oldest daughter. She's very intelligent, and they seem to get along really well, because both of them are Light casters.

After Ridley turned Dark, she was disowned by her family. Delphine still loves her daughter, and cares for her.

She treats her son like any mother would. When Ethan Wate was frozen on the floor, she told Larkin that he ate like a pig when Lena threw Ridley out of the house.

Ryan is the youngest, so she cares for her child. They don't have much time together, but it's understood that Delphine cares for Ryan.

Lena is Delphine's niece. She cares for her immensely, helping her fight the curse that she's supposed to be Dark. She tries to contain Sarafine when she possessed Lena by a "Blood Circle"

Macon is Delphine's half-brother. They are known to live with each other. Macon and Delphine care for each other very much, as if they were the only two siblings.

Sarafine and Delphine were sisters. When Sarafine turned Dark, and became a Cataclyst she got thrown out of her house. When she saw this, she was upset. 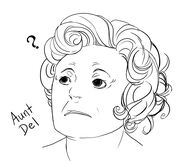